Harness the Power of Commitment 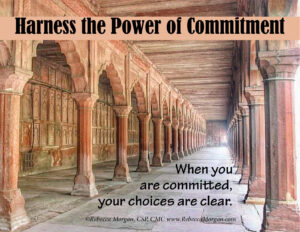 “Damn the torpedoes and full speed ahead!”

Military expressions are valuable during war when the price of failure is death. But they lose impact in our business or private life: failure is not quite as final. However, these sayings are based on a principle that applies to all aspects of our lives: commitment.

This commitment to one’s goals is, for me, the most important rule for success. Without it, we fall prey to procrastination, bad habits, laziness, rationalization and a host of goal-defeating problems.

Commitment is a strong word — much stronger than “agreement.” If I agree to meet you for a movie, I have three options — keeping my agreement, cancelling, or changing it. If I commit to meeting you, I will meet you no matter what.

Commitments often require sacrifice in order to achieve a goal. If your goal is to be self-employed, you will probably need to sacrifice an active social life for awhile.

When I started my business, I worked 14-hour days, six to seven days a week. I was totally committed to my goal. I dreamed of owning my own successful seminar company. I wanted to help others become the best they could be. I wanted to share my knowledge of the universal laws of success and make a living doing it.

I worked for someone else from 9:00-5:00, then I either designed, researched or presented a seminar in the evening. During lunch hours, I made phone calls to prospective clients. On weekends, I wrote my client correspondence.

I was busy, but happy. Sure, it was exhausting, but I was able to achieve my goal of being self-supporting in my own business in just one year, instead of the 2-3 I projected. I owe my success to my commitment to my goal.

I haven’t achieved all my goals. At one time I wanted to be an interpreter at the United Nations. I took courses in Spanish, French, and Japanese, but then I gave up. For many years, I talked about learning to fly an airplane. I talked, but never took the first step. Looking back on my life, I can see the difference between goals I was committed to and ones I wasn’t: I’ve succeeded at my committed goals.

When you are committed to your goals, attaining them is easier. Your choices are clearer. If your goal is to become the top salesperson in the company, then the choice between going home when everyone else does or staying an extra hour and to make ten cold calls may not be easy, but you know what you have to do, and you do it. If your goal is to lose 15 pounds, your choice between having a carrot or a piece of carrot cake becomes clearer. When you are not committed to your goals, your choices become hazy.

Being committed means doing whatever it takes. Commitment does not mean walking all over fellow workers or stabbing people in the back to attain your goals. It does mean making those extra phone calls or jogging around the block or working long hours even when you don’t feel like it.

When the first Neiman-Marcus store burned to the ground in 1913, 5.5 years after it had opened, the owners could have easily collected the insurance money and gone off to do other things. But Herbert Marcus was the dreamer of the partners, and he persuaded them to collect the insurance money, canvas the family for additional funds and build a larger store.

They could have given up, but they didn’t. Marcus kept the dream alive and did what it took to create an internationally known specialty store. Marcus was committed.

Lee Iacocca did what it took to save the ailing Chrysler Corporation. He even took only $1 a year in salary in order to leave the capital in the company. It worked. Now Chrysler is a successful auto maker again. Iacocca was committed.

Being committed to our goals often isn’t easy, and it takes considerable time and effort. That’s why we make so few commitments and often have such trouble keeping them. Americans in general are impatient; we don’t like to stand on line or wait; we want what we want right now. If everyone in America were promised a million dollars, tax free, for meditating one hour every day, from 5-6 a.m. for two years, I believe a high percentage would never collect the money. “Too much trouble,” we’d say. That’s the trouble with commitment — it’s too much trouble.

Commitment requires strong self-discipline, and a persistent inner voice to urge us on. Self-discipline grows out of our commitment to our goals. Your inner voice may also conflict with your stated goals. This voice tries to fight commitments and wants to get out of them. It may say, “Oh, go home early. You’ve worked hard. You deserve it.” Like a soldier facing the enemy, we face our own inner enemies — “I’ll do it tomorrow.”  “I can’t do it.” When we accept a commitment, it should be with “do or die” determination, otherwise it’s only a weak agreement. Real commitment takes courage, sacrifice, and perseverance.

If you are able to hang in there and work toward your dreams and your goals a little bit each day, you will have them. Commit yourself to the attainment of your goals, and develop the self-discipline to do what it takes. As an added benefit, you’ll achieve the satisfaction and confidence that comes with your success. Don’t let this be said of your life:

In war, sports, life, those without commitment to victory and success often create their own defeat. If we could see the meaning of “do or die” as does a soldier in battle, we would be victorious more often.

When you are committed, anything is possible.